Even though we now live in a small seaside town in a remote part of Queensland, it’s certainly never boring!

When we first arrived 6 months ago, we believed that all the community had to offer was fishing, surfing, eating fish, more surfing, sleeping, more fishing, more sleeping and pootling around in a tinny, or cracking open a tinny.

How wrong were we.

Firstly, it’s turtle haven here! Every year between November and February, the huge Loggerhead, Green and Flatback turtles arrive on our beaches to lay their eggs. Then about 8 weeks later, the baby turtles hatch and make a desperate run for the sea. Only one in a thousand baby turtles make it to adulthood, so those little baby turtles have a real fight on their hands. With this in mind, Glen and I decided to step in and help. We are now official turtle volunteers and have had all sorts training, including predation, stranding, track identification, measuring, tagging, it’s been quite an education. The theory was great, the practical not so great getting up at 5am to walk 6km’s or more along the high tide mark to spot turtle tracks, then walking the beaches from dusk to dawn to spot and monitor any turtle arrivals and that’s with holding down a full-time job (well Glen is, I’m more of a part-timer). The rewards are witnessing a beautiful Loggerhead drag herself up the beach, then spend ages working out the best place to dig a hole to deposit her eggs. 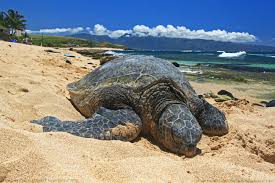 We’re so dedicated that we even appeared on the front page of the local rag for dancing whilst selling burgers at the local 70’s music turtle fund-raising evening!! 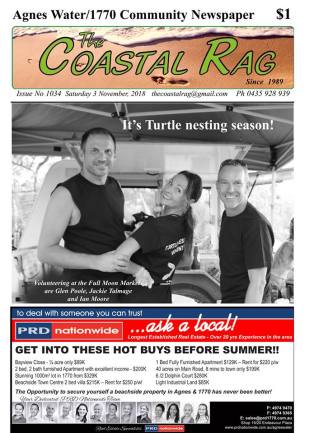 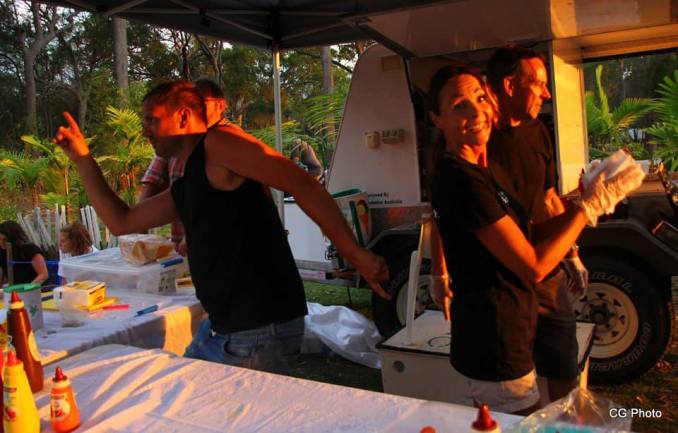 Secondly, if that wasn’t exhibitionist enough, we’ve just performed in the end of term Circus show!! The Circus classes are usually for kids to learn how to swing from the trapeze and climb the silks, but us being big kids we didn’t think twice about attending the Circus Trapeze Skills class for adults.

What we lacked in skill we certainly made up for in humour.

Glen played an over weight, over enthusiastic aerobics instructor. He wore a pair of orange lycra leggings, red silky boxer shorts with ‘I’m HOT’ written on them, a maternity T shirt which had on the front, ‘I bet my bump looks good in this’, and rainbow sweat bands. I was one of the old grannies who attended the “Zimmer Zumba” class and  wore a beige nylon nighty, tan stockings with pink pants to go over the top. I tucked the back of my nighty into my pink pants (for health and safety reasons) and I also stuffed a hump in the back of my vest. The idea was that when Glen’s back was turned, all us grannies did summersaults on the trapeze, then back to barely being able to move when he came back to facing us. We only just made the PG rating when Glen and I did the pelvic thrust to the Time Warp, with him standing right behind me! I also managed a comedy fall from the silks 8 foot high. 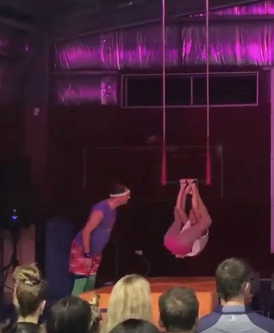 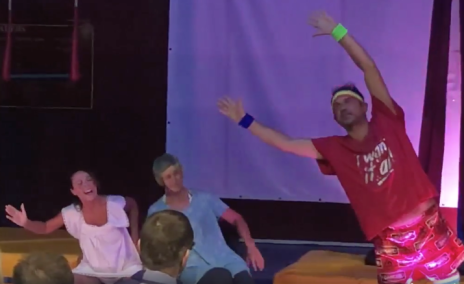 Of course Glen was the star of the show, me coming a close second. It was a hilarious evening for everyone.

Thirdly,  after 15 years of living by the Ocean, I can finally stand up on a surf board! Glen and I have both had surf lessons in the past, but I’ve never been able to stand up. It looks so easy, but believe me it’s not. I can stand up on the board while practicing on the sand, but taking the moves into the unpredictable surf is an entirely different matter. So there we were, amongst 20 back packers, in the surf spluttering about having another lesson. Luckily the waves were excellent that day and I was determined to STAND up on my board. I was in the water for 2 hours trying again and again to stand. Glen conveniently twinged his back after the first 10 minutes, so he waddled off to the nearest cafe and had tea and cake instead!

I’m so pleased I persevered, because I finally STOOD UP, even if it was just for 4 seconds!!

Fourthly, we have taken up Kayaking. I bought us an inflatable double Kayak, purely because we can’t transport a solid kayak in our motorhome. So there we were on our first experience trying not to look like complete novices while we were surrounded by some of the most skilled water craft people on the planet. Our first test was learning how to inflate the thing properly, which took up almost the entire day. The relief came when we finally set off on the pristine estuary of 1770 and we didn’t fold in half and sink. I was also relieved we didn’t fly off through the air like a balloon being let down, which was my other concern. 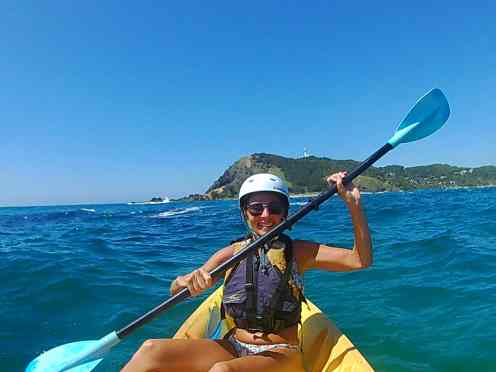 All this said, there are downsides to living in paradise. For the past 10 days it has been like living in a war zone. We have been surrounded by bush fires, the worst QLD has ever had. Our town is safe now, but it was real touch and go for a week. The fire planes were flying so low over our house as the local emergency runway is at the back of us in the bushland. Helicopters and planes were landing and refuelling with gallons of water every 5 minutes then taking off again.

We’re in a drought which didn’t help matters because it set the fires off like petrol to a flame.  100 kms of National park were on fire and we were only 10 kms away from it. We were all on standby to evacuate as soon as we received THE text, so it was all rather unsettling. Not to mention the HEAT!! 40 degrees somedays because we were shrouded in smoke. We were kept awake at night by burning in our throats as we inhaled the dry sooty air. Embers are still floating in the air and the sea is filled with burnt debris. 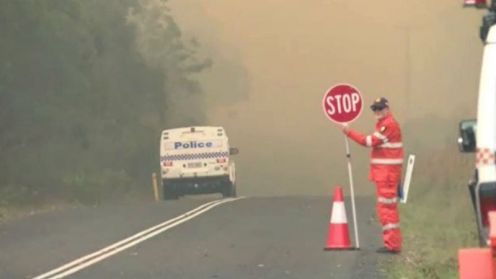 The wind has now turned, so the fires are now raging in a different direction, so we can all breathe a sigh of relief (albeit a sooty one). We’re all just praying for rain as it’s been dry for so long. However be careful what you wish for because we hear a cyclone is now on its way!!

I have now come to the conclusion that living in Paradise is RUBISH (in a magical beautiful kind of way!)