It’s not everyday that a possum falls on your head!

One night, before I was about to go to bed, I was emptying a bucket of water under a tree and the next thing I know, a baby possum had landed onto my head! I screamed which made the poor thing fall into the bucket I was emptying, both of us looking suitably startled at each other, he then sprang out of my bucket and shimmied along a fence post before he scarpered off into the bush. It was in that moment that my wildlife explorer instincts kicked in. I grabbed my super strength led light torch from the motorhome, leaving Glen tucked up in bed contentedly snoring and wandered off in my pyjamas into the bush.

I had a great time. I saw a sugar glider leap from one tree to another, a family of the cutest black possums with pink noses, a snake (not a dangerous one, I think) and a Tawny Frog Mouth owl like bird sitting on a branch just a few feet away. The Tawny Frog Mouth was not at the least bit bothered that I was taking lots of selfies with it, in fact it rose to the occasion by turning its head to show its best side!

My torch then died, so I fumbled and groped my way back to the motorhome feeling quite pleased that I had chosen that moment to empty my bucket.

Maybe I should explain. We’re on the road again…..as if you hadn’t guessed.

It’s been 9 weeks now since we arrived back in Australia. Time seems to have new rules and dimensions when you live in a motorhome and constantly on the road. One day blends into the next. People, places and faces start to blur into a soupy mix of experiences. People ask me ‘What have you done this week?’ or ‘Where were you yesterday?’ and sometimes, I embarrassingly can’t remember. Maybe it’s my ageing brain, or the fact that there is no fixed routine, but there’s something quite nice about living in the moment and going with the flow.

It’s slightly different for Glen however because circumstances have changed for him. He now has a full time job! Fortunately this hasn’t put a stop to our adventure, oh no on the contrary, it has enhanced our adventure because we now have financial security and we can do normal things like; plug into electricity, stay at campsites with facilities, have meals out and even go to cafes and order Turmeric coconut lattes! This is the beauty of living in the age of technology because you can work online and be anywhere in the world you fancy and in our case, it’s in a tin box somewhere in Australia.

So at present we are currently slowly heading up to Agnes Water (1770) which is a small community at the southern end of the Barrier Reef in Queensland. This is a place Glen and I have decided we may like to settle. When I say we are slowly working our way up to Agnes water, I mean really slowly. We have covered a distance of 170km in 2 months! That’s the equivalent of under 3km’s per day.  The reason for this is because we’ve been camped out in Byron Bay in NSW and very reluctant to leave this special place. 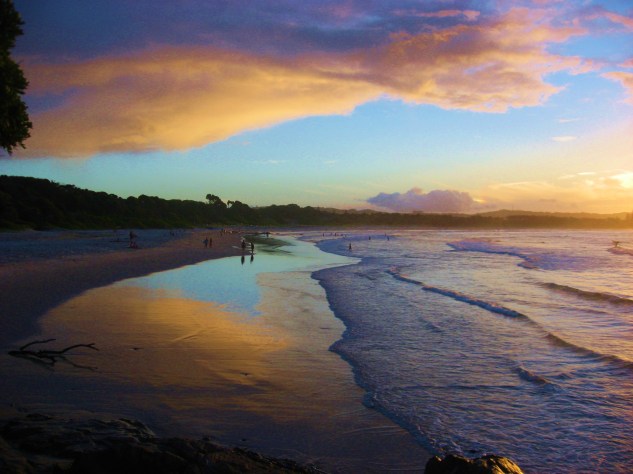 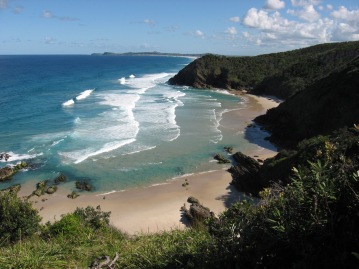 There’s a place called The Crystal Castle which is a massive area in the beautiful hills at the back of Byron Bay, which consists of giant crystals and all things mumbo jumbo. 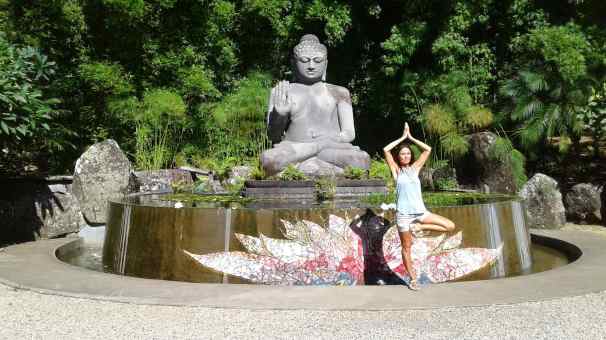 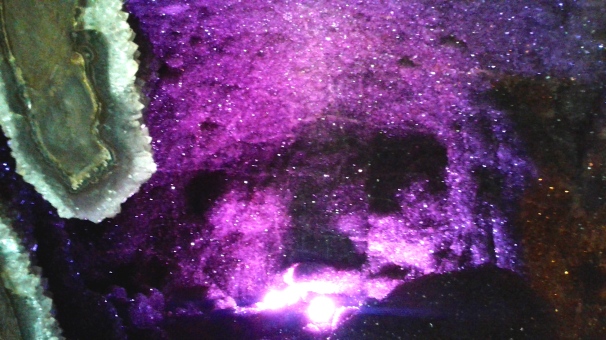 It was here that I discovered that plants can sing.

Apparantly all plants can sing, and trees and rocks, everything alive in fact, because everything alive vibrates to a certain frequency and if you are extremely sensitive, you’ll be able to hear or feel the sound. However most of us rely on the limited range of our ears, so we need additional help. At a place called Damanhur in Italy, researchers have been experimenting with plants, measuring the reactivity of the plants to their environment and their capacity to learn and communicate. They have invented a devise which picks up the plants vibration and translates it into sound. The plants have become familiar with the devise and have learnt to use it to sing and communicate to other plants and to us.

I had the pleasure of experiencing this at the Crystal Castle and it was truly amazing. They sent their own researchers to Damanhur and managed to replicate the same devise that converts the plants vibration into sound. The electrodes were rigged up on a range of plants and they did a demo and we all heard them sing together like an orchestra, truly spine tingling.

Each plant was named after a famous singer, so when Madonna the Peace Lilly was wired up, I asked the lecturer whether Madonna minded playing ‘Like a Virgin’ for us all. I forget sometimes that most people don’t share the same warped sense of humour as me, so the request was ignored, however Madonna played a beautiful harmonious tinkling of notes, which actually, if you have a wild imagination like me, could definitely have been ‘Like a Virgin!’ 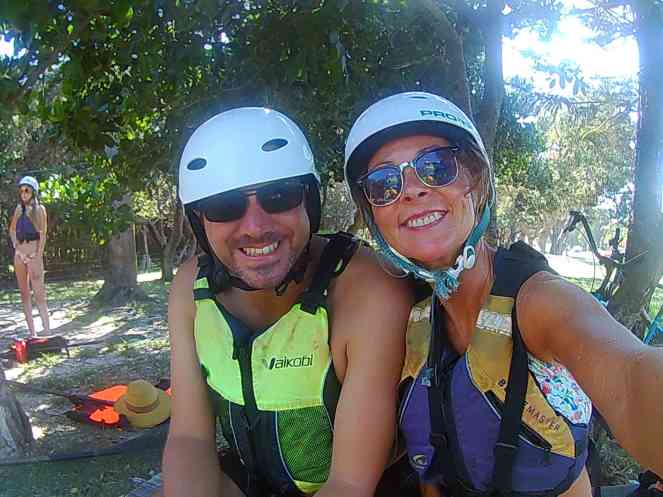 Glen and I went on a Kayak with dolphins tour.  As soon as we set off in the tandem Kayak, me in the front and Glen at the back, Glen started to feel sick. He didn’t tell me at first and so I was nagging him from the front telling him to stop slacking as I seemed to be the only one rowing!! Then I saw his green face!! 3 hours we were rowing and for 3 hours Glen was really seasick!! He kept jumping off into the water, almost capsizing me every time, just so he could alleviate the nausea for a bit. We didn’t see any dolphins and the sea was getting rougher with every stroke. When we finally landed back to shore, Glen dived onto the beach, curled up in a foetal position, and thats where he stayed for quite a long time. He even refused the complimentary tea and biscuits at the end, so I knew he must’ve been bad!! 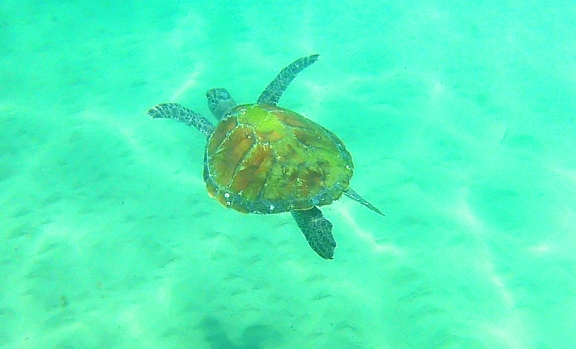 The next day I saved a giant Green Turtle. Well not saved exactly, but I certainly contributed to its wellbeing. I was snorkelling off the main beach in Byron Bay and came across this beautiful creature. I swam around with it for a bit, then it dived off in pursuit of some food. The food in question turned out to be some toilet paper which it started to happily much on. I was outraged! I suppose it could’ve been worse, it could’ve been plastic, but come on, TOILET PAPER? REALLY?? Surely toilet paper isn’t a very tasty meal, soiled or unsoiled! So I dived down after the turtle and skilfully managed to whip most of it out of its mouth before it took a second gulp. The turtle turned around and gave me such a grumpy stare. I was trying to communicate that I was doing it good, honest, but it was not at all impressed and dived under a rock to sulk.

There is a happy ending and it’s on this VIDEO. The next day after the toilet paper saga, I swam back out to the scene of the crime and the turtle was at the same location, under the same rock, and after a while it came out to say hello. I managed to capture on film him/her happily swimming about with me. It had clearly forgiven me! 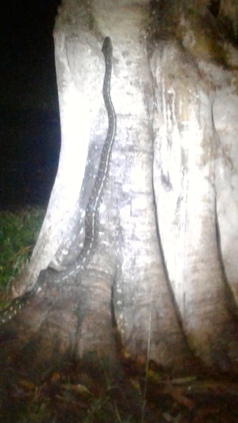 We had a surprise visitor one night. Our neighbour was banging on our window to tell us a massive Python was crawling up the tree next to our van. It must’ve been at least 2 metres long. We had 3 days of monsoon rain and we were getting flooded out, so I’m assuming the snake was searching for higher ground!!

When it rains here, it really rains! We finally prized ourselves away from Byron Bay and made our way up into the hinterlands. We stayed at a friends very beautiful house tucked away in a lush rainforest pocket. Then once we’d dried out, we continued further up the mountain range.

Finally we arrived in the Binna Burra, a National Park on the border of NSW and QLD. It was here where the possum fell on my head!

Unfortunately, when it rains in the rainforest it means only one thing for me, LEECHES!! I love all forms of wildlife with the exception of leeches. I once had a killer leech attach itself to one of my veins and I’ve never seen so much blood! Spurts of the stuff like you’d see in a horror movie, so whenever there’s rain, I’m extra pre-cautious. So before I went hiking, I wrapped myself up in 100 layers which isn’t the most comfortable thing to do in 35 degrees heat. Also forget the natural stuff, I sprayed my feet, legs and clothes in the strongest insect repellant I could find. The views were spectacular and well worth almost poisoning myself for! 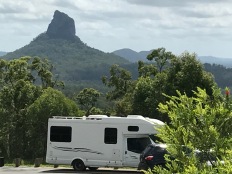 So on the road we continue, really really slowly and enjoying every magical moment of it!

If you enjoyed my Turtle video and, if like me, you are concerned about marine life conservation, then check out these Turtle products which I have designed with the intention of spreading awareness for these beautiful creatures. I hope they make you smile!