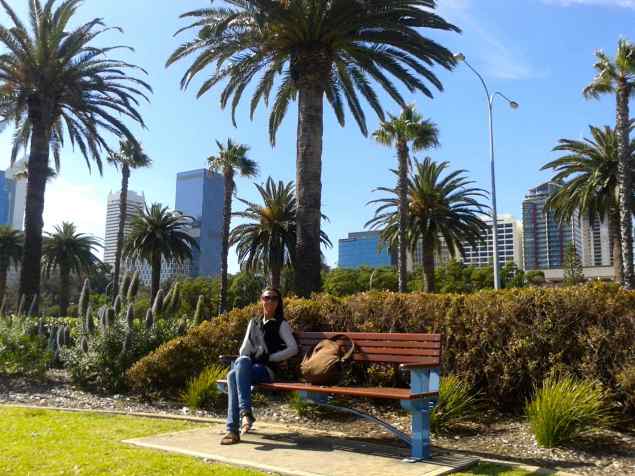 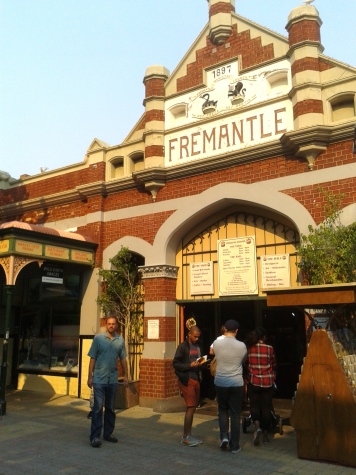 We made it to Perth and what a shock to the system that was!

We were used to driving on just one deserted straight road and the further south we drove, the busier and more complicated the roads seemed to get. Wealth was obvious in the cars that passed us, no longer were we sharing the road with beat up old ‘Utes’, instead we were surrounded by big sparkly vehicles with double exhausts that would overtake us with an angry poof of exhaust. The other shock to the system was the COLD! We were accustomed to 40 degree’s plus and this was a freezing 19 degrees! Neither of us even owned a jumper let alone a coat, so a visit to the nearest mall was necessary ASAP!!

Before we braved the sprawl of suburbia, we spent a day acclimatising in Yenchep a small town north of Perth. We knew the town wasn’t the best of choices to visit when we were stocking up on our groceries in the local ‘Woolies’. The woman at the checkout asked us how long we had been in Yenchep. ‘We’ve only just arrived’ we said cheerily. She leaned in close over our tins of tomatoes and said in a hushed tone, ‘The best thing you can do is leave and never come back’. We looked around us thinking that we were somehow in deep trouble, but she went on to say that she’d moved to the town a few years ago and soon realised it was a big mistake. So we grabbed our groceries and headed back out of town to Yenchep National Park instead. 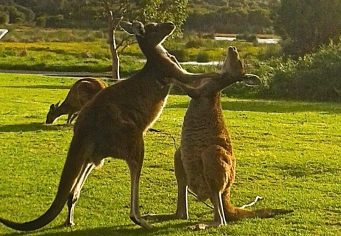 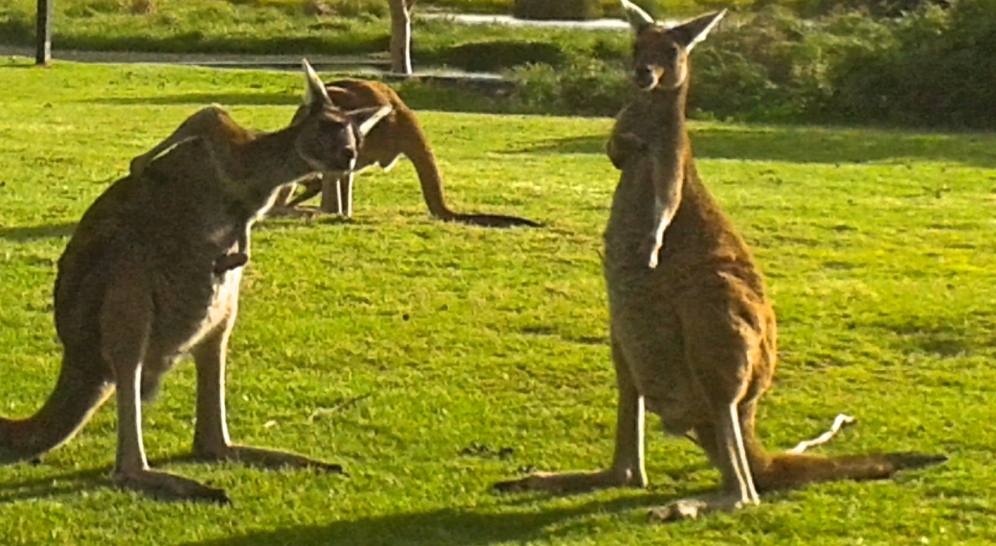 We liked the National Park, nothing like the grandness of the NP’s we were used to, but it had a definite charm. The teashop and visitors centre were housed within art deco style buildings oozing with history (well as historic as it can get in Australia). There was a koala walkway with lots of the fluffy critters snoozing in the trees which was adorable. There were also kangaroos hopping around the lawns not at all bothered by us humans. I decided to sit with a mob of Kangaroos on the grass hoping they wouldn’t notice that I didn’t have big ears and a long tail and they seemed quite happy for me to be amongst them, so much so that a family squabble broke out among the two younger males. They boxed each other for about half an hour and then got on with the task of scratching and munching grass again.

The following day we braved the city.

Pity the van is so HUGE as it is really quite scary negotiating it through city traffic. Even with a sat nav we managed to get lost a few times, going round and round the one way system never seeming to get out again. It’s such a culture shock from the sparseness and quietness of the rest of WA. Glen was running a conference in the centre of Perth that week so we needed somewhere to stay within reach of the CBD. We found a camp ground in a suburb called Forrestfield, so we made that our home for a week.

The day we arrived in Forrestfield, I was not feeling my best, I think the stress of our constantly changing landscape and the long journeys had caught up with me. I wanted to get the chores over and done with quickly, which included a haircut for Glen, hoping to turn his feral features into something half presentable for is conference. I had just finished giving him the chop, when a Chinese woman appeared from the tent next door and came up to me. She pointed animatedly at my scissors. ‘Hair cut?’ I said. It was obvious she didn’t speak English but she nodded enthusiastically. So I pointed to the barbers chair that Glen had just vacated and she sat down. ‘Oh lordy, what have I got myself in to?’ I asked myself. I’m not really a hairdresser even though I have been cutting family and friends hair for years. She had a beautiful curtain of dark grey hair styled into a classic bob. It looked great as it was, why did she want me to cut it? I started to hack away, terrified I was making a pigs ear of it. I couldn’t really communicate to her how much she wanted me to cut off, so I tried to follow the line it was in already but a couple of inches shorter. I was starting to sweat. 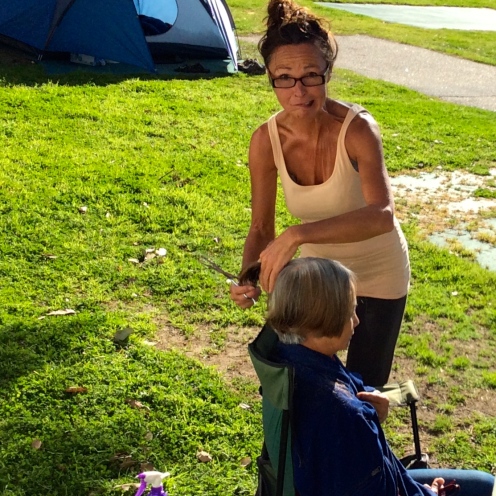 Was it the sudden show of sun that was making me feel so hot, my tiredness or the immense stress I was under trying to make this woman’s hair look slightly reasonable? When I had finally finished, I released the poor woman and she scurried back to the safety of her tent with a few bows of her head. It was then that Glen broke the news to me. ‘She only wanted to borrow your scissors, probably to cut her toenails or something and you pinned her down and hacked all her hair off!!’

It was a bad day for me. I felt so awful for this poor  woman and to make matters worse, whenever I saw her (from the safety of the van) she was wearing a big hat which Glen kept appropriately calling, ‘The hat of SHAME!’

I had to hide with my humiliation for five days until she left the campsite and then my guilt levels finally got back to a healthier level.

Glen’s conference went well and after that we managed to find ourselves a great place to stay in the Northern Beaches of Perth. We were asked to house sit and look after two adorable whippets for 2 weeks. So here we are revelling in the pure luxury of four solid walls, electricity, wifi, hot showers, a big cosy bed with the biggest novelty being SPACE! I have walked in and out of each room a hundred times, just because I can and Glen and I have claimed our own personal space at the opposite ends of the house to each other, just because we can. I wonder how long it will take for the novelty to wear off and we’ll be gagging to get back into the van and hit the road again. 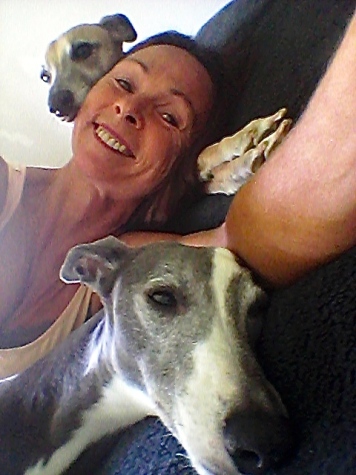