An explosion went off at the back of the van as we were driving 100kph along a long dusty road towards Normington North West Queensland. It wasn’t a bomb planted there by a terrorist (which was my initial thought) but one of our back wheels had blown. Glen skilfully and calmly manoeuvred the dreamtime off the road while I went into crash position repeating my mantra, ‘Shit shit shit shit’.

The tyre was well and truly blown. Once my shakes subsided and I could breath again, we reached for the phone to call our breakdown service, purchased for just such occasions. However we soon discovered we had no phone reception. We also soon discovered that neither of us knew how to change a tyre which was a bit daft of us seeing as we were driving on deserted roads in the middle of nowhere. We also discovered we didn’t have a jack which was even more daft of us, but we agreed it would’ve been obsolete anyway seeing as neither of us knew how to change a tyre.

We were working out what we could do next when a man with a caravan drove past and luckily came to a halt to see if we were OK. John was a proper traveller. Not only could he change a tyre, but he could change a BUS tyre AND he had 3 jacks!! He was shaking his head in disgust at us when we confessed to not having a clue what to do….’They shouldn’t let you drive out here without sufficient tools and knowledge’, He said shaking his head even more. We whole heartedly agreed with him and looked at our wise rescuer with hopeful expressions.

John rolled up his sleeves (only metaphorically because it was a 40 degree heat and all he had on was a vest) and got to work on helping us out. Glen disappeared under the van with the jack in his hand and John was barking instructions at him. I was also being very helpful by holding the instruction manual in my hand just in case. After many grunts, huffs and puffs (and that was just from me!) an hour later, Glen and John between them had successfully changed our spare tyre.

John made a hasty retreat to his next destination as we waved him goodbye with gratitude in our hearts. We loaded the blown tyre in the back, then jumped in the front, reversed, then heard an awful grinding metal screech coming from the back. We jumped back out of the van again and on inspection we discovered that the blowout had severely buckled the metal wheel guard which was now scraping on the back wheel.

Now what?? We were in the middle of scratching our heads when another vehicle drove past (and there weren’t too many on this road.) This time a 4 wheel drive pulled over and a young man and his girlfriend jumped out. On the side of his 4 wheel drive Ute were the words, ‘Diesel Mechanic Outback’ We couldn’t believe our luck!  He saw what our issue was and with his strong bare hands he ripped off the offending wheel guard (I was very impressed, Glen wasn’t!) He then pumped up our tyres as he said they looked a bit flat. When he had finished we asked him what we could give him for his expertise, he said he didn’t want payment as karma would sort it out and off he sped! When we finally got back on the road and to Normington we bumped in to diesel mechanic man again. Unfortunately he had also broken down just after he left us, fortunately someone had come to his rescue. Blimey Karma was quick! (That’s because he was a Kar- ma-chanic!! Get it!?) 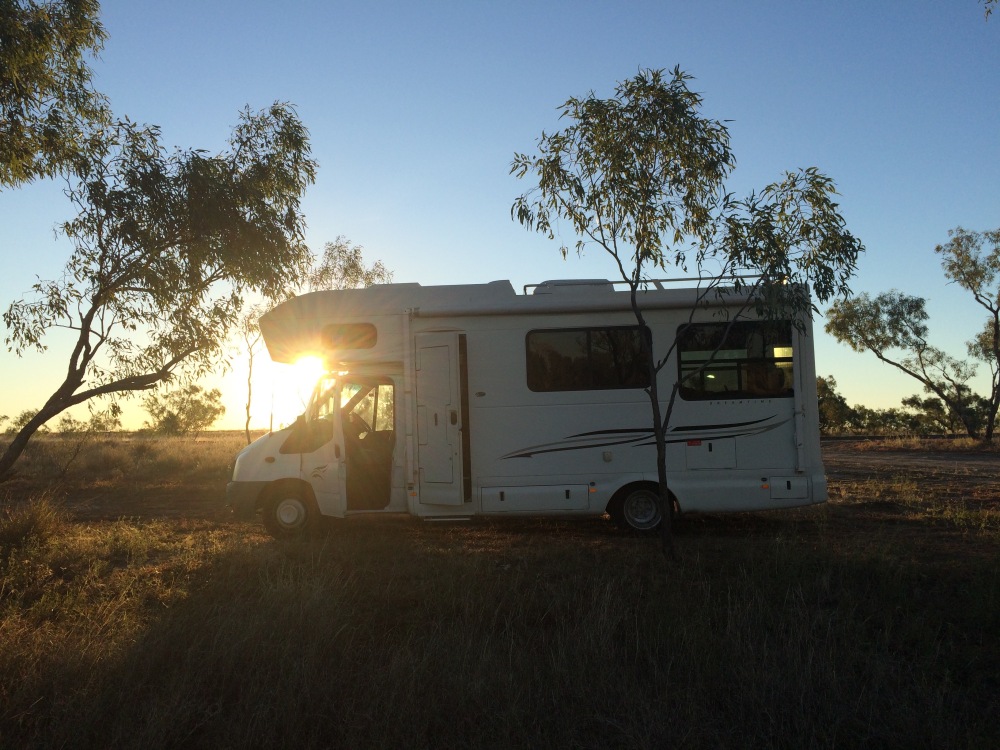 We then spent 3 days crawling tentatively to a town called Mount Isa where we knew we’d be able to get our tyres fixed. The roads were littered with dead Kangaroos and Vultures which broke my heart on every on every turn. The road ahead was one big stretch of red which would quite often turn into one lane for oncoming traffic and for us to share. It was not good on my nerves when a road train would trundle towards us at 100kph expecting us to give way to him.

But it didn’t prevent us from feeling the magic of the outback. No internet or phone reception is sometimes such a blessing, nothing to dilute the pure sensory pleasures of nature. The smell of the dry soil and eucalyptus combined, the sounds of the birds squawking and the crickets chirping. Stunning sunsets of fire red, stars so bright and beautiful it puts insignificance on our petty concerns. We camped by Billabongs and watched the migratory birds flock in and out. We lit a fire every night and sang songs along to Glens guitar. There is something very magical about the Australian desert. So wild, natural and raw. 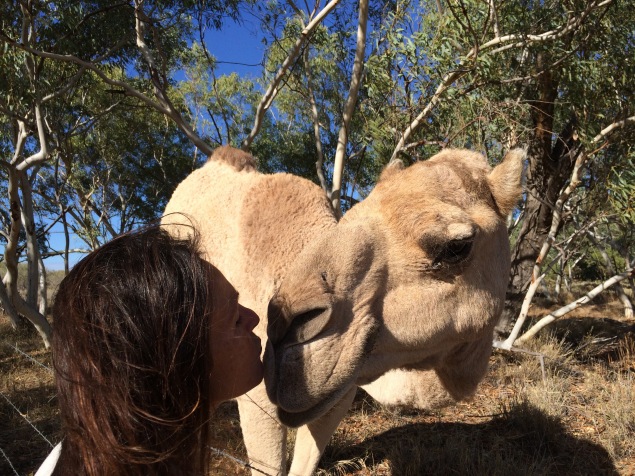 We pulled into Mount Isa a few days later in one piece. Mount isa reminds me a bit of Las Vagas (only in location and not the vibe) It’s weird to have a big thriving mining city in the middle of nowhere.  Here we were in our element. At last Internet! Hot showers! Electricity! Woolies supermarket! MacDonalds! Toilets! Diesel under $1.20 a litre! Things I never dreamt I’d get excited about! We bought a jack and an air pump for our shock absorbers and we got our wheel replaced. We managed to find a metal maker, a man in his 60’s who made us a new mud guard and fitted it himself! We also found out the tyre was blown due to the shock absorbers being faulty, not good news but at least we now know.

After our rest, we tentatively crawled to Katherine taking about a week and I’m so glad we crawled as we absorbed some amazing sights and experiences. The termite hills are HUGE and stretch as far as the eyes can see. Some jokers have dressed the termites in clothes making them look like humans, odd ones at that. One had a burlesque bodice on and another just a bra. That kept us amused for a good few days. There are hot springs filtering in from the rivers here all the way up to Darwin which was well worth a wallow. We floated downstream amongst rainforest watching the dragonflies and the flycatchers swoop. This helped with my nerves as we had our SECOND blow-out a few days later! Glen luckily now knows how to change a tyre and I now know the manual on ‘how to change a tyre’ off by heart.

We’ve been on the road for three and a half months now and it has certainly been a magical adventure of highs and lows so far. I am learning so much. Learning how to stay calm in a crisis, learning to stay in the moment, learning how to rustle up a hearty meal with a mouldy old carrot and a tin of beans but the main thing I am learning is to TRUST. TRUST that we are always being looked after, that things always work out, but most important of them all is that I have learnt how to change a spare tyre!